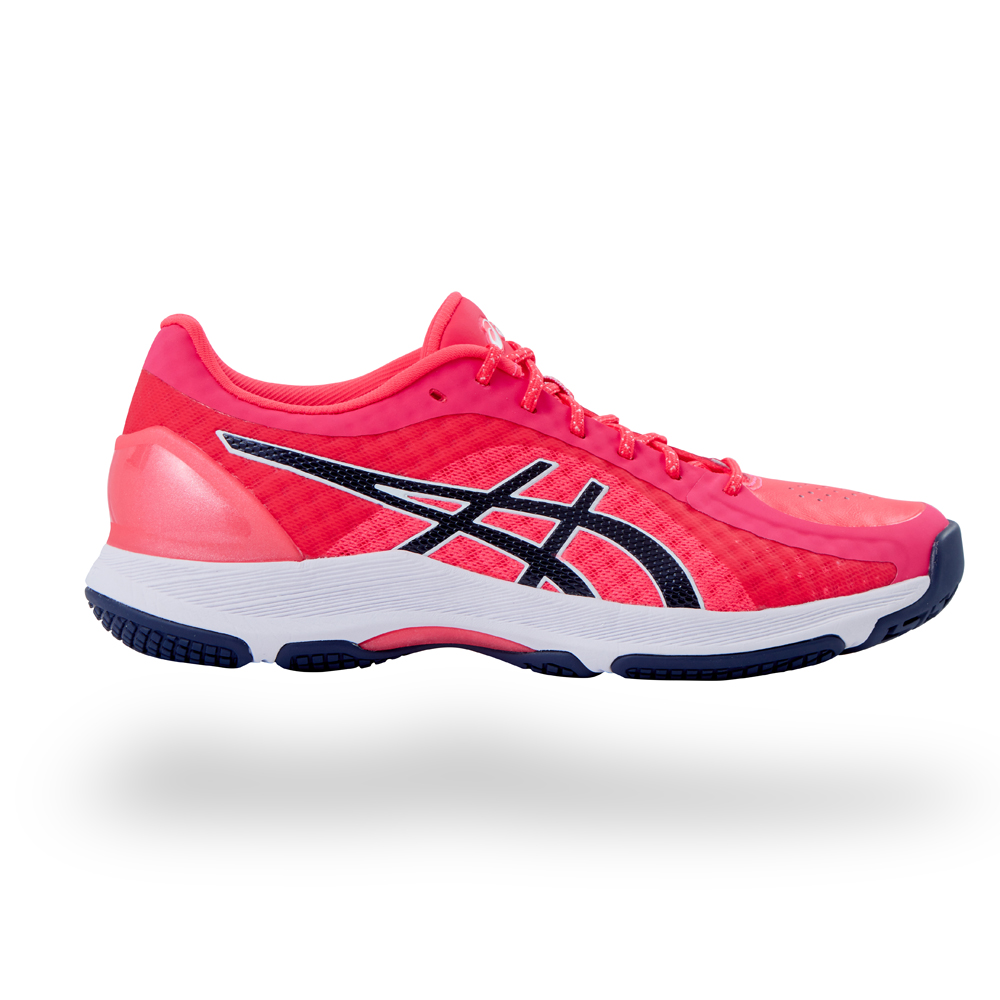 Maintain the edge on court with the women's NETBURNER SUPER FF diva pink netball trainers by ASICS. With FLYTEFOAM™ technology for energized cushioning, this shoe provides supportive comfort throughout even the toughest match.

The AHARPLUS™ outsole features a high abrasion resistant rubber compound at heavy impact areas and gives reliable grip as you weave past your opponents. Meanwhile, EVA technology in the midsole cushions your feet from impact on hard surfaces.

You won't need to worry about working up a sweat thanks to the removable ORTHOLITE™ sockliner, which moves moisture away from your feet to help you focus on your game. Added stability comes from the California lasting, allowing you to make high-speed moves with confidence.Lace up the NETBURNER SUPER™ FF shoe and enjoy your best performance yet.

FLUIDRIDE©
A twin-layer structure is made of lightweight Solyte™ and high bounce SpEVA™. The cushioning properties of Solyte™ absorb impact when striking the ground, while the rebound qualities of SpEVA™ enhance movement into the next step.

PERSONAL HEEL FIT (PHF)
3 layers of memory foam line the collar and mold to the heel creating a personalised fit.

REMOVABLE SOCKLINER
A sockliner which can be removed to accommodate a medical orthotic.

REARFOOT AND FOREFOOT GEL CUSHIONING SYSTEMS
Attenuates shock during impact and toe-off phases and allows movement in multiple planes as the foot transitions through the gait cycle.

AHAR+
This is a thinner and lighter version of ASICS High Abrasion Resistant rubber. It is placed on heavy contact areas of the outsole to reduce excessive wear without compromising durability.

CALIFORNIA SLIP LASTING
For stability and comfort. The upper is stiched around a canvas or EVA board and directly attached to the midsole.
The ASICS Super FF netball shoe has been released in three stunning new colours: Peacoat, Vapor & Diva Pink - which is also exclusive to Netball UK!

So now we've crucially established it looks great, even more importantly, this top of the range trainer shouts technology. The Super FF has everything you need to support you while playing netball and is the only ASICS netball shoe to feature all nine of the top technologies.

If you want stability this is the shoe for you! Just ask England & Manchester Thunder vice-captain Laura Malcolm - she swears by them and is now wearing the diva pink.

The Flyte Foam cushioning ensures you're protected underfoot while also being light to enhance performance. The high performance element give you structure and stability and is suitable for all positions on the netball court.

This is the best version of the ASICS Super generation and we are sure it will be popular.

WE WON'T BE BEATEN ON PRICE
& THAT'S A PROMISE

OUR TEAM IS HERE TO HELP

We use cookies to provide and improve your shopping experience.