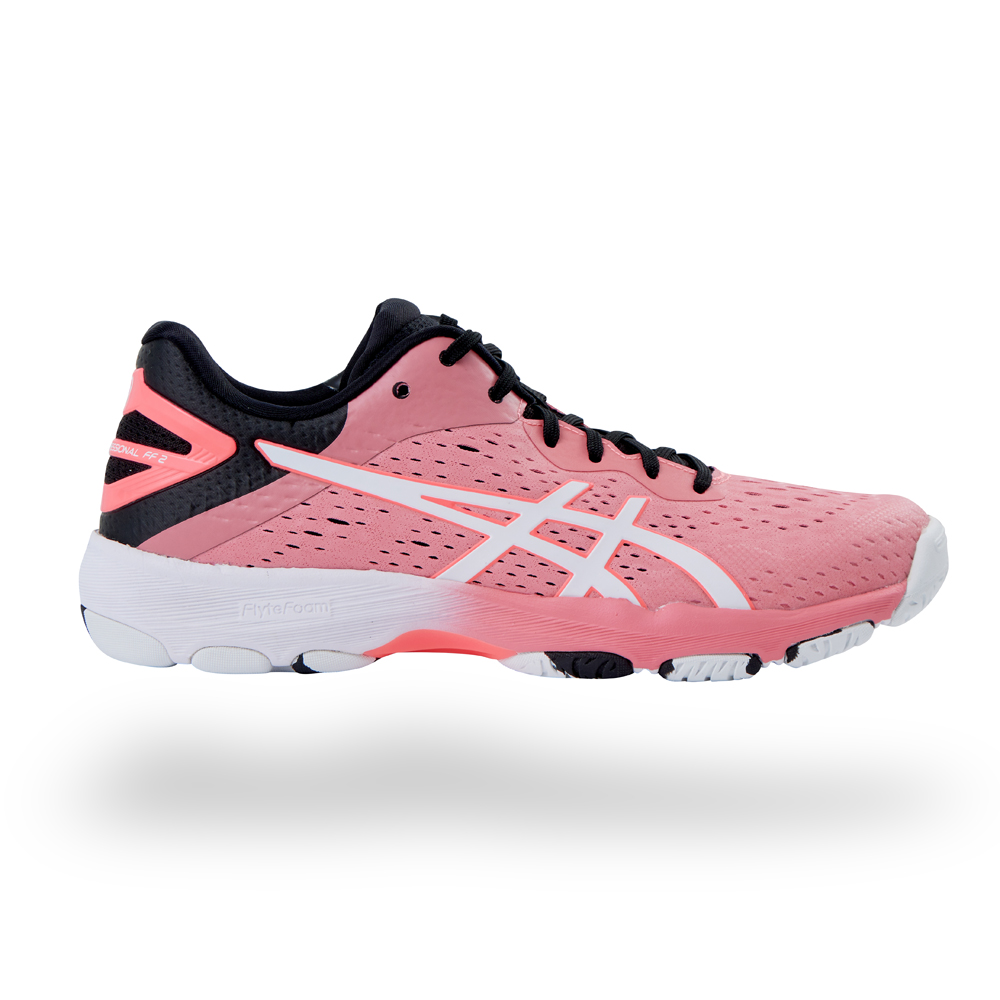 The NETBURNER PROFESSIONAL™ FF 2 blazing coral netball trainer is the lightest and most responsive netball shoe yet from ASICS. A popular style amongst our roster of professional athletes, this shoe is fused with advanced technology that offers excellent flexibility and improved pivoting on court.

Prepared with an upper that implements an airy mesh paneling, this shoe strategically circulates air throughout the forefoot to keep feet cool and dry during performance. Both lightweight and ultra-responsive, this shoe pairs GEL™ technology based cushioning and a FLYTEFOAM™ injection in the midsole that supplies plush cushioning and improved shock absorption without adding any additional weight. Flexion grooves in the outsole create an adaptable feel and a close to the ground contact.

Designed to improve ease of movement, the NETBURNER PROFESSIONAL™ FF 2 netball shoe also promotes a responsive stride with an adaptable fit that moves with the foot's natural motion.

The Netburner Professional FF 2 is the most lightweight and responsive netball shoe ever produced by ASICS and is the choice of many top Superleague and international netball players.

Compared to the previous model, ASICS have changed the construction for a sleek look. The placement of the Engineer-Perforated PU is specially designed for better flexibility while giving you support to stop your foot splaying over the outside of the trainer when changing direction.

The heel counter is more noticeable because it is placed on the outside and made visible. This will not only give that extra stability, it will also show as a more stable shoe

FlyteFoam™ technology made with reinforced fibres provides lightweight and continuous cushioning no matter the duration. Court sports like netball require more side-side motion and back-force motion where durability is key. That's why court specific FlyteFoam™ midsoles are not only approximately 35% lighter than the industrial standard midsole material, but also approximately 10% more durable than FlyteFoam™ midsoles designed for running footwear.

Carefully designed and strategically located, ASICS GEL on forefoot and rearfoot provide high-density shock absorption where it's needed most to maximize comfort. Remember there is a strategic amount of GEL in netball shoes to ensure you are well cushioned on landing but not unstable.

The TPU Trusstic supports stable movements by reinforcing the sole and preventing the shoe from twisting, a key technology for the movements in netball. Ensuring that the shoe remains stable underfoot particularly when changing direction.

The Professional FF is the most lightweight netball shoe in the ASICS range AND packed with technology. The FlyteFoam technology is revolutionary and the best development from ASICS in a while - it keeps your foot stable while giving ultimate cushioning. It is also 30% lighter than previous models.

You don't want too much cushioning underfoot as it will become unstable during the movements involved in netball.

It impressively scores 4.8 out of 5 in our reviews from happy customers, who describe this netball shoe as 'really comfortable and light netball trainers.' And 'Great design. Good grip on the court even when playing on a damp surface.'

So, if you want a netball shoe that is light, stable and a good looker this is the one for you.

WE WON'T BE BEATEN ON PRICE
& THAT'S A PROMISE

OUR TEAM IS HERE TO HELP

We use cookies to provide and improve your shopping experience.